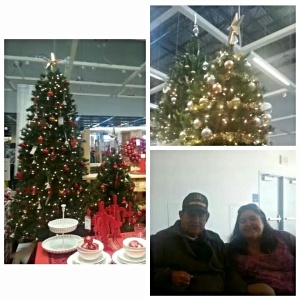 Have you ever been to IKEA?  It’s a large Swedish based store that is all over the world now.  The first floor (at least the ones I’ve been to) you walk through is actually the 2nd floor.  Meaning, you walk in on the ground level and are “forced” to take an elevator or escalator to the 2nd floor.  A large cafeteria greets you, or you can turn away from the cafeteria, grab a large bag and handcart and start walking through the showroom.  Living rooms, bedrooms, kitchens are displayed as far as the eye can see.  They are so realistic looking in their setup, I’ve been tempted to try to bake something in the oven and take a nap on one of the large beds.

The main issue with IKEA is that once you are in the showroom, you have to keep going.  Unlike a mall where you can go into one store, get what you want and leave, you HAVE TO KEEP GOING in IKEA.  Sure, there are little shortcuts so that you can skip, say, the bedrooms, but once you are in, you are in that store.  I love IKEA but I hate the trapped feeling.  I’ve had a few panicky moments in IKEAs.  So you can imagine my surprise when my Dad said he wanted to accompany me, my husband (both IKEA Vets) and my friend (IKEA Virgin) to IKEA this past Saturday.  I went immediately into protective caregiver mode.  “It’s REALLY big, Dad.  You need to wear comfortable shoes.”  I called the IKEA to see if they rented scooters.  (FYI, they do not) They DO have wheelchairs you can borrow but I know my Dad.  He’s not going to sit in a wheelchair.   I tried to  be as prepared as possible.  I packed Tylenol, Advil, bottled water, snacks and a small handheld fan.  We took two vehicles, Dad and my husband in the truck, and my friend and I in her car.  The guys got there first (of course, girls have to stop and take coffee breaks, bathroom breaks, etc) and my husband informed me that Dad was comfortably eating IKEA’s $2.99 breakfast and drinking coffee.  I could have predicted that.  Dad loves breakfast, and he loves when they are cheap 🙂

We arrived as they were finishing up.  I tried to ask in a non nagging, casual tone if Dad wanted me to grab a wheelchair.  Of course, he refused.  We slowly (because everyone in Charlotte was there, apparently) made our way through the showroom, our mission, to find the bed my husband and I wanted to buy. Obstacles were everywhere, darting children, people stopping in the narrow walkway to talk, people stopping in the walkway to look at an item (move!) but we made it.  Dad was tired, I could tell.  We examined the beds, decided on the right one and I offered that we could wait on the comfortable couches.  I settled them in (Dad and friend) and ran to help my husband. I had my first panicky moment when I saw the chaos that was the “you pull it section”.

To call it “crazy crowded” would be an understatement.  45 minutes later, we had successfully pulled everything and were almost near the front of the checkout area. I called my friend for the 4th time and got a “dad update” (still sitting on the couch, reading an IKEA catalog, kept referring to IKEA as “a large maze” and getting “trapped in the maze”) and we made arrangements to all meet in the loading zone. My poor husband loaded 90% of the furniture into the back of Dad’s truck while my friend and I tried to help. We got Dad and my husband on their way, and then my friend and I headed back in  IKEA  to do our own shopping(spoiler alert: It was even more crowded, if that’s possible).

I did learn something from all of this, that I think can be applied to caregivers and family members of those with PTSD. Sometimes you just have to let your Veteran do things.  I was prepared as I could be, and Dad handled IKEA like a champ. Your schedule might get re-adjusted a little- be prepared for that and be flexible.

I saw Dad Sunday night, and did sort of a check in.  He really liked IKEA, but said he would only go again on a weekday, when it was less crowded (good luck) and again he referenced the maze, but said that I seemed to know “all of the shortcuts” so I could go back with him to help.  I think this was overall, a positive experience.  We could do it again.

Click Image for Finding Peace with PTSD on Amazon

My Tweets
Join 78 other subscribers